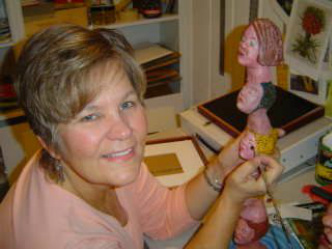 Theresa Knight McFadden is a mixed media artist who creates sculptures as well as paintings and works on paper.  She has shown her work in many venues in the US including the Corcoran Gallery of Art in Washington, DC and galleries in New Orleans, Santa Fe and numerous other cities.  Theresa has spent most of her life in Northern VA. but since retiring from teaching art at Northern VA Community College in 2011 she splits her time between her home and studio in Alexandria, VA and her home in Cambridge, MD where she maintains a studio as well.  She often shows her work in Cambridge.
Theresa Knight McFadden holds a bachelor's degree from George Mason University in Fairfax, VA and earned a Master of Fine Arts degree from the University of Maryland in College Park, MD.  She is Professor Emerita in Art from Northern Virginia Community College.